Too Many Toys Are Bad for Children

Recently, I have been wondering, does having too many toys affect children?

I came from a psychology background, so I am well aware that home environments can affect how people behave, think or feel.

One of the things I realized recently is that all of the clutter in my house, including my kid’s toys, is affecting how I behave, think and feel.  It is pulling me away from my children and making me irritable.

So I resolved to give up clutter for good.

I have dabbled in decluttering for the past few years.  I get inspired and go through about 1/8th of a decluttering checklist, and then fizzle out due to feeling overwhelmed.  Don’t get me wrong though.  Even going through a fraction of the decluttering list is better than doing nothing.  And I have done this several times.  So I am making progress.   Slow progress.

But it is time to get serious about my clutter.

By far, the worst area of my house is my basement family room.  The whole room is devoted to toys.  Each item down there has a home with like items.  We have a people and animal bin, a large vehicle bin, a small vehicle bin, a baby toy bin, and on and on.  But RARELY is everything put back in it’s home.  Most frequently, the floor is covered with DVDs, trucks, train tracks, books, blankets, fruit snack wrappers, and the like.  The other day, I turned the corner of my basement stairs and surveyed the toy-pocalypse that had occurred.

Feeling anxious at the sight of it, I thought to myself, “This cannot be good for my kids.”

So I typed, “How does clutter affect children?”, and was shocked by the results.

Here is what I learned.

Children who live in homes that are “chaotic,” that are noisy, overcrowded and have a lack of order (umm, my basement??), have significantly more challenges than kids who don’t.  Research has found that kids who had homes like this, “tend to score lower on tests of cognitive ability and self-regulatory capabilities, have poorer language abilities, and score higher on measures of problem behaviors and learned helplessness than do children raised in less chaotic environments” (Jaffee, S., Hanscombe, K., Haworth, A., Davis, P., and Plomin, R., 2012).  They also have, “lower expectations, a lack of persistence and a tendency to withdraw from academic challenge” (Hanscombe, K., Haworth, C., Davis, O., Jaffee, S., and Plomin, R., 2011).

So, how does clutter affect children?  Let’s break that down for a minute.

Kids who have messy homes don’t do as well cognitively.  They have difficulty ordering their thoughts, and performing on academic tests.

They have a hard time regulating their emotions.  This may mean that they are more prone to outbursts.

They struggle with language.  They may have a hard time expressing their emotions with words, which leads to those emotional outbursts.  Or maybe they have a hard time listening and understanding what others are saying.

They have more problem behaviors.

How else does clutter affect children?

They experience learned helplessness.  This means that they feel that they cannot change the environment around them to make things better for themselves, and means that they stop trying when things are difficult.

Instead of feeling confident that they can do well in school, they give up.

Wow.  It was even worse than I imagined.

Are you wondering why these things can occur for children who live in messy homes?  Well, the research has shown that parents who have messy homes do not answer their children as much when they talk.  Interesting right?  It kinda makes sense though.  If I am sitting in a messy house, I am thinking about what I need to do to make that house not messy.  I am not sitting on the floor playing with my kids.  I am constantly straightening, organizing, cleaning and decluttering.  This is part of why the children have lower language skills.

The research has also shown that children may cope with living in such a cluttered, noisy environment by just mentally filtering out the unwanted stuff.  We all do this.  We sit amongst the clutter and tune it out, so to speak.  This is an adaptive trait for humans, and a good thing overall.  BUT, children who are used to doing this at home may also do this in the classroom setting.  Meaning that they maybe aren’t paying attention to the teacher.  Or that they maybe aren’t picking up on the environmental cues in the room that tell them how to act and what they should be focusing on.

Does clutter affect children?  Yes!  But what does all this mean?

It means that I need to get rid of a lot of the toys in my basement.  Even though I am able to organize them all, it is stressful for me to try to put them away every day.  And my kids are basically incapable of cleaning them all up on their own due to their young age.

But even more so, it means that all of that junk is potentially hurting them.  It is making it hard for them to focus, and affecting their brains in ways that we aren’t necessarily seeing.

So, while all of those toys were purchased (as gifts – I don’t buy my kids things!) with the intent of bettering their minds, increasing their potential and enriching their lives, they are actually having the opposite effect.

Armed with this knowledge, I intend to reduce my kid’s clutter SIGNIFICANTLY.  Because, it is actually better for them to have less.

Check out how it is going!

After you’ve decluttered, be sure to organize what is left!  Here are some adorable organizers!

A classic, cute toy chest, with two compartments for sorting!

A compact dress up station complete with multiple compartments and a full length mirror!

A sturdy shelf for books or cubes of toys.

Cubes for your shelf!

A bookshelf for all those books your kid loves (and that are SO good for their brain)!

Drop me a note below.  I’d love to hear your thoughts!

Want to read the articles that this information came from?  Here are the links: 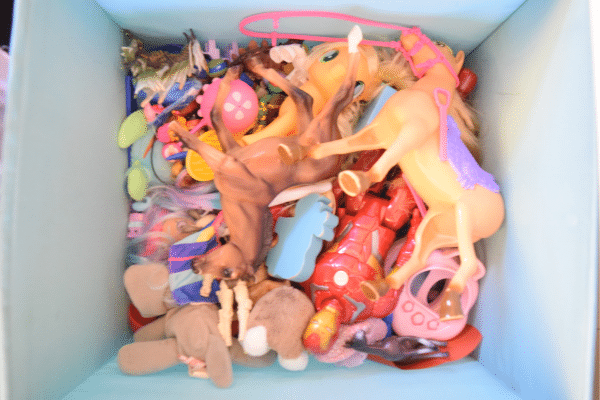 Get Your Toddler to Sleep In Their Own Bed

What You Really Need For A Baby

Practical Gifts for a Busy Mom